Slow progress would be the best way to describe this week. As Harry’s father said ”Wasn’t your time after work in Imperia and Marseille meant to be for planning how to do all of this?”, we realised we probably should have done a bit more of that and a bit less of eating cheese and wine and exploring.

Onwards and upwards though and despite the van not looking a whole lot different inside we have actually done quite a bit. To begin with Tina had an extensive clear out and scrub. The original floor boards and walls were pulled out to repair, fill, and paint a few holes in the chassis made by screws because obviously, nobody wants a leaky van (more on that later). 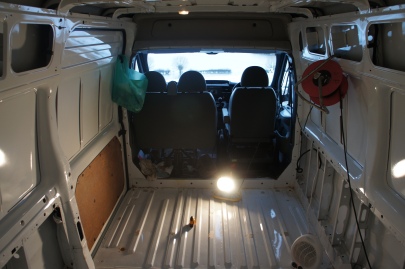 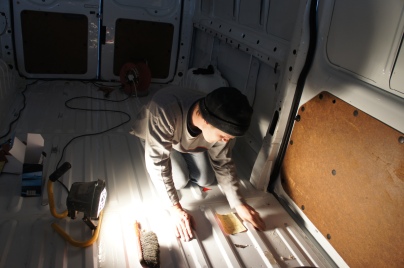 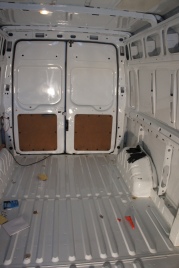 Our next big challenge was working out how to fix wooden beams to the chassis so the flooring insulation can fit in snugly around them. The old floor boards will be secured back in and the floor finished off with some lovely vinyl wood flooring salvaged from Harry’s farm, one of the finest specimens of hoarding in Gloucestershire. ‘Storage Wars’ would have a field day here as there are 4 shipping containers and 3 barns full of stuff we have been riffling through, from kitchen units to office suites, old boats to whiskey crates. But more on this later too.

The van floor has a series of grooves running length-ways and the original plan was to slot the beams in these. However, this was going to prove unnecessarily difficult because they were different depths and we weren’t too keen on drilling straight through the van again. Cue help from various other blogs, videos and builders and the beams are now width ways over the grooves, thus giving ventilation space and easier application of the insulation. They are secured from underneath the van using Tek screws which are self drilling making our lives slightly easier too.

For insulation we are using standard loft wool and Celotex which are big boards of foam in various widths you can easily cut to your desired shape and squish in place, then filling awkward gaps left over with foam spray. This is all then covered with a foil thermal vapour barrier and secured with foil tape and thank god we got the original floor boards back on by now as i’m getting bored just telling you about this so I can only imagine how you feel. 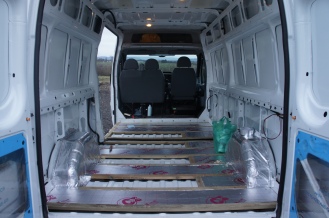 Despite some tedious jobs like this we have had an eventful week. One of my personal goals for this project was that I wanted to try and use as many reused materials and items as possible and luckily Harry’s farmyard is a treasure chest for this. This is obviously far better for the environment, controlling Harry’s father’s hoarding problem, and our pocket money. We have found and plan to use various bits of wood, both types of insulation, a really nice unidentified wooden kitchen worktop to fit our gas cooker and sink into, cabinets and storage for the kitchen and under the bed and the vinyl flooring. Tick. I have also been sifting through Ebay, Gumtree, Freecycle, and Facebook market place daily and we have managed to get a roof rack and double mattress both in great condition and for a lot less money. Tick

Some things we have chosen to buy new partly for quality reasons and partly so the van can be sold on easier and hopefully, fingers crossed, not as a huge financial loss. After many debates and squabbles I have given in to buying a brand new motor home fridge and i’m actually pretty chuffed about it now. I think Harry’s winning statement was that we wouldn’t have anywhere to chill beers and prosecco, how could I have been so narrow minded at the start. We have also invested in a plush gas ring and sink combo unit because actual tears were shed at one point as the thought of D of E expedition food and a diet of pasta and rice flashed across my mind. If you haven’t guessed already I really like food and in no way will this be compromised on this trip.

The Prosecco and Beer fridge 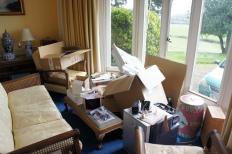 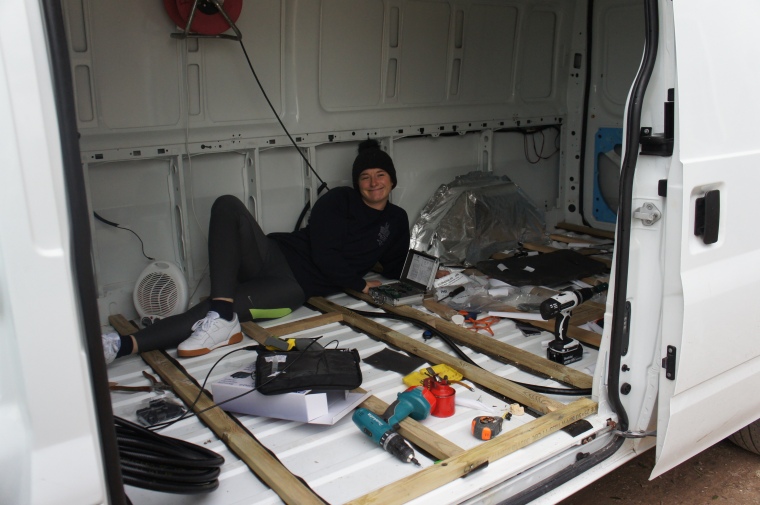 With copious trips to the local Travis Perkins and Handyman combined with online shopping, we have bought most of the stuff to make a tiny home in the van. The hard part is assembling it all now. Much of the week concerning this aspect has been two steps forward one step back and lots of shouting at each other in between.

One particularly stressful day involved cutting a huge window shaped hole in the van. From the start the window was a pain. It was delivered to the wrong house and when we found it half the installation kit was missing too. Two days later and we were ready to start but cutting an irreversible hole in a seven thousand pound van is quite daunting. Harry suggested we get somebody to install it for us to which my reply was ”Nonsense, of course we can do it ourselves otherwise they wouldn’t have sent instructions”. End of discussion. Harry was set in his way of drilling holes and basically playing dot to dot with a Jig saw. My attempt at trying another way and making an exact template of the shape we had to cut was later named ”useless” and overlooked. However, dot to dot was working out well and we then just filed down the cut line to get rid of sharp edges. 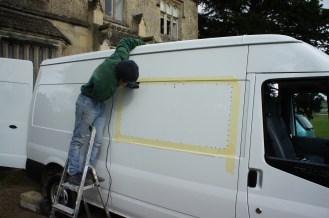 As we crept towards late afternoon it was getting increasingly darker and colder and the hole had to be filled. With no time to let the metal protecting paint dry we fitted the rubber tubing over the cut line which I would not advise to do with wet paint. We began to prep the areas with the primers and cleaners in the installation kit but then fell over a small hurdle, where was the adhesive in the orange topped pot? By this point I had smeared extremely black and permanent looking primer on the clean white van and began to get the giggles. This didn’t go down too well and Harry became the annoying person who phones at five minutes to closing time and phoned the glass company. The very helpful and long suffering sales assistant on the end of the phone basically said ignore those instructions, they are wrong, the orange topped pot is also primer, and do it this way. After a quick reassembling of ourselves and of the products we applied the real adhesive sealant, lined up the glass pane and got it in place. A small round of applause and hugs later I dashed off home to make myself a large Gin and tonic and cook my mother some supper. A happy ending after all.

The next day Harry was coming over to mine in the afternoon to continue with work. Mid breakfast I was interrupted by a phone call from him:

”Good morning, how are you? Has the window fallen off?”

Sudden images of us in Mongolia freezing of exposure due to a leaky window began to appear. Hopefully this situation can be avoided with another application of sealant round the window pain. If not I don’t know what we are going to do. Not many people try and rip up sealant such as the one we used, often used in building and heavy duty applications, but I happen to be one. It is used a lot on yachts for sealing things together and taking it off is not fun, easy or tidy. I guess you will have to tune into our post next week and see how it turned out…

One thought on “Van Conversion: Week 1”